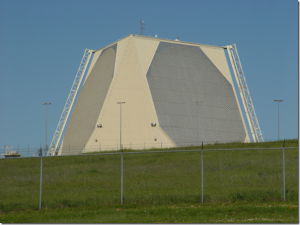 On October 4, 1957, the Soviet Union stunned the world with its surprise launch of Sputnik-1, a two foot diameter 180 pound man-made satellite orbiting the earth every 92 minutes.

This Soviet achievement caused the United States and Canada to build a massive military defense system which would give warning of an attack by “orbiting bombs.” ICBMs had not been invented yet.

That system, the Ballistic Missile Early Warning System, will be described in detail by a person who worked on the BMEWS project for 400 days in Northern Greenland.

Skip Aubry was first licensed as KN2LXC in 1955. In 1964, while serving in the United States Air Force, he was a certified Electronics Counter-measures instructor for *SAC EB-47 bomber flight crews.

* Strategic Air Command
In 1968 he joined RCA Service Company as a Tech Rep and was assigned to support the RCA BMEWS presence in Northern Greenland.

As an RCA Tech Rep he was initially a BMEWS radar System Engineer and later a BMEWS Computer operator. While in Greenland he was licensed by the Danish Government and was active on the ham bands for more than a year as OX5AC.

Come find out more about this fascinating fellow at our April SBARC Club meeting and about what it was like to think that during the next few seconds our lives and those of our neighbors could be turned upside down.

We hold our Santa Barbara Amateur Radio Club meetings at the Goleta Union School District, 401 N. Fairview Ave. in Goleta, right across the street from the Goleta Library. Doors open at 7:00 PM and the meeting starts at 7:30 PM.

Post expires at 1:00am on Saturday April 16th, 2016 but will still be available on Club News page.