We’ve recently upgraded our packet radio capabilities here in Santa Barbara. Very popular back in the 80’s, packet lost much of it’s appeal with the advent of the Internet and email. However, for those of us interested in digital modes, packet radio is making a comeback. Unlike out normal HF oriented digital modes, packet lets us communicate with email like messages between users locally, and users of other packet systems around Southern California and beyond. 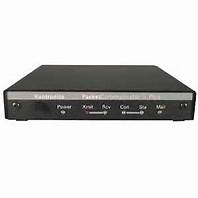 The K6TZ-3 packet station on La Cumbre Peak offers a PBBS (SBPBBS) system for messages and a Digipeater (SBDIGI) for relaying packet messages to other systems. It runs on a Kantronics KPC3 TNC and broadcasts on 145.050 at 25w. It has incredible reach easily reaching other packet stations down the coast of California. Recent modifications were to add KA-Node capability. This allows us to connect to out KN-Node (SBNODE) and connect to other KA-Nodes. You can connect from node to node to “chain” a connection from here to almost anywhere within a reasonable distance. Similarly, others can reach us from remote locations the same way.

I also installed two of my own packet stations here locally. They are mostly for fun and have nowhere near the coverage the La Cumbre Peak station has. However, they allow me to have my own mailbox system and people can leave me a message on my own systems.

Packet radio is far from dead. In a SHTF emergency, packet capabilities will allow 100% accurate text based messages to be sent quickly and easily. In my opinion, this is an extremely valuable skill to have and even if its popularity is not what it once was, it enhances our capabilities as individual amateurs as well as a club. It isn’t as complicated as it may seem, and is actually fun and challenging.

We discuss and operate packet on the Tuesday night SBARC Digital Modes Net, so if you have an interest, be sure to check in.