Repeater Updates From Our Trustee

A file photo of the La Vigia communications site atop the Mesa.

Effective April 15, the former GE Mstr II repeater and its associated ACC RC-850 on 146.790 at the La Vigia site has been decommissioned. In its place is a GE MSTR III which will act as a surrogate system without any bells and whistles. It has the required time out timer and a CW ID. All synthesized voice announcements, autopatch and macro functions are disabled for the time being. The remote 2-meter receiver at UCSB and voter will be temporarily offline.

As explained by Matt Lechliter, W6KGB, at last months club meeting, the Mstr II will be converted to a uMstr with the addition of a new RLC Club Controller. Essentially the former repeater retains the same electronic design configuration. However, all the mixed cabling used for multiple variants will be discarded which will make the system easier to maintain by improving the common interconnections. A single RLC controller is now capable of handling six serial interfaced independent systems, multiple macros, and planned system interfaces tailored to the needs of emergency services and daily users. Commonality of a single controller will have the capability to interface the six-meter repeater, 440 IRLP repeater, the UCSB remote link and voter, ELT receiver, NWS warning system, etc. Command integration of the 146.79 (at La Vigia) and 145.18 (at Santa Ynez Peak) repeaters will be possible via ethernet controls over the club’s microwave data system. Most importantly the controller will be ethernet capable which will ease the load on control operators through remote computer-enabled configuration. We shall try to maintain the basic configuration of the previous club and ARES net functions as best possible. But no two systems have the same design features and capabilities so we must adjust and learn. As we move forward the first task is to upgrade the MSTR II to a uMstr. This should take about 2 months. Meanwhile the task of interfacing the six-meter and 440 system will be on-going. In time you shall see a much more capable system. 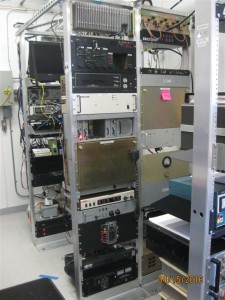 Mstr III mounted on top in rack above the Mstr II. Mstr
II and controller has been removed for modification to a Micro-Mstr.

A last word about the RC-850. The controller was way ahead of its time in the 70’s. It has served the club extremely well by performing a myriad of timed macro’s, voice synthesizer, paging variants, auto-patch capabilities, plus many control bells and whistles as a single system controller. The limitation of the 850 was interfacing of remotes or additional functions plus finding personnel who wanted to spend their time understanding the unique command software controls and becoming a good control operator-engineer. Hat’s-off to the ACC people. They designed a controller that worked flawlessly for over 35 years. But time moves on. Hopefully the new system will attract competent technical people who love to work with systems integration.

Levi is a member of the SBARC Board of Directors and is the K6TZ Trustee. He is also a Volunteer Examiner.
View all posts by K6LCM →