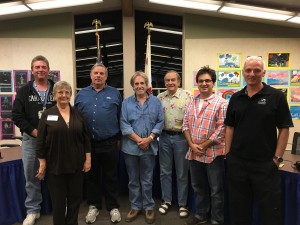 Annual elections were held at the well attended club meeting on November 20th, 2015 to elect the SBARC Board of Directors for 2016. As there were no nominations from the floor, Darryl KF6DI made a motion that the club accept the proposed slate. The motion was seconded by Dave K9KBX, and carried after majority approval by the members present. The newly elected officers and directors are Brian Milburn K6BPM President and CEO, Tom Saunders N6YX Chief Financial Officer (CFO), Dorothy Oksner K6DSO Secretary, and Directors at Large Theo Howe KK6YYZ, Levi Maaia K6LCM, Frank Dambach K6FLD, and Jay Hennigan WB6RDV. The new board will continue to move SBARC forward with new faces, new ideas, and new enthusiasm. We look forward to 2016 being another year of progress for amateur radio in Santa Barbara.

Post expires at 6:47am on Tuesday January 5th, 2016 but will still be available in the archives.

One Response to New Board Elected for 2016