As a result of the retirement of Dave – K6HWN, I recently volunteered to take on the Wednesday night Swap Net duties.  The Swap Net comes on every Wednesday night at 8:00 pm after the Club Net. Then Hayden – KK6OYV, expressed an interest in helping with the nets, so now I share this responsibility with him.  We trade off every other week.  I get to the 146.79 K6TZ repeater using the remote link through the 224.08 repeater on La Cumbre peak. My only 1.25 meter radio is a 5 watt HT from Wouxon, model KG-UVD1P.  Ok, so why this article?

If you were listening to my net control debut last November 25, 2015 you would have heard a very well prepared novice net control operator.  For about 20 minutes.  Unlike most other nets, the Swap Net is a net that has the control operator reading for 30 minutes, with occasional breaks for other traffic.  That means I was asking my little hand held to do the job of a base station with all its heat sinks and fans and the like.  It did not like that one bit and expressed its displeasure by shutting down due to overheating.  I was frantic trying to figure out what to do.  To those listening, I just went silent in mid sentence.

So, I had a choice.  I could go out and buy another mobile radio that covers 1.25 meters for about $150 to $250 or figure out a way to cool my little HT.  Since I’m trying to scrape up the money for a decent antenna analyzer, I decided to try to stretch my radio’s capacity for handling excess heat.

I had a “battery saver” device from Wouxun that allows me to plug the radio into a cigarette lighter socket.  It was already becoming unusable because overheating caused warping of the plastic that supports the contacts.  This device supplies 12 volts to a circuit that converts 12 volts to 8 volts as well as conditioning to protect the radio.  Computer CPU fans use 12 volts DC to run them.  When I remove the battery from the radio there is a big magnesium body with two power connectors and several labels.  So, I thought a big heat sink and fan stuck on the back might do the job.  So, off to the local computer repair store to look for parts.

CompuWest on Hollister, near Turnpike in Goleta has a lot of older computer repair parts and the guys that run it are really helpful.  Turns out that a standard CPU fan with heat sink for the old Pentium processor fit just right in the back of my radio with just a little play side to side.  I carved up the “battery saver” and used everything except the case, which is now a pile of plastic chips.  I plucked the 12 volts from the cigarette lighter cable and provided a little connector to the fan.  I then soldered up two alligator clips, with insulating booties, to supply the 8 volts to the radio.

I removed the labels from the back of the radio and cleaned the bare metal with acetone.  I then applied a good amount of thermal grease to the area where the heat sink will interface with the radio.  Clamped it all together with tie wraps and electrical tape.  The photos below are the result.  I tested it on the Digital Modes net on Tuesday night to see if the fan acoustic noise was too loud or if electrical noise was getting into my signal.  All reports were that I sound OK, and the fan acoustic noise is barely a whisper.  The real test will be tonight when I run the swap net and hold down the transmit button for 30 minutes.  These modifications can be completely undone in minutes to return the radio to standard use.  The main issue will be cleaning the thermal grease out.  Not too bad on flat surfaces.

I’ll update this after the swap net tonight.  Wish me luck!  Jim – N6SXB

Update:  Worked like a champ!  Did the entire net using 5 watts and the radio barely got warm. Jim – N6SXB 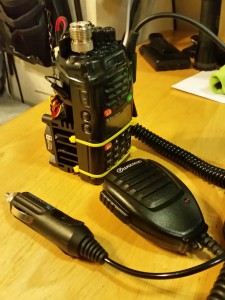 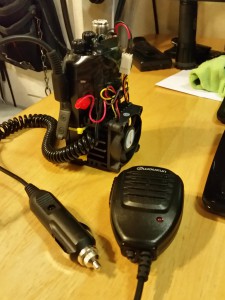 2 Responses to The Birth of FrankenHT