There is a LOT going on this month, and it there was ever a meeting you don’t want to miss, it’s this one.

First off, there will be a lot good of HF, VHF, UHF, and Microwave gear, as well as a few amplifiers on sale. This is from a donation to the club and 100% of the proceeds will be used to benefit the club!

It is also election night. We will elect our Board of Directors for 2016, so be sure you come and make your vote heard! A slate was proposed by the nominating committee in October and additional nominations will be accepted from the floor.

In addition, this will be our Fifth Annual Home Brew night. Bring whatever you have that you had a hand in — Designing, Building, Modifying, Ruining — all will count. Put something in writing next to your entry to let us know about what you did. Don’t be embarassed — be proud. Bring it!

Now on to our speaker! Our guest speaker for the evening will be Wayne Overbeck, N6NB, the inventor of the world-famous ‘Quagi’ antenna and now the holder of the DX Microwave record of all time, which will be his subject for the evening. Wayne is a sought-after speaker in the Amateur Radio community. Retired Professor of Communications, emeritus, from California State University in Fullerton with Ph.D and J.D. degrees, he has too many accomplishments to mention in a short introduction. This will be Wayne’s third presentation to SBARC. We are honored! 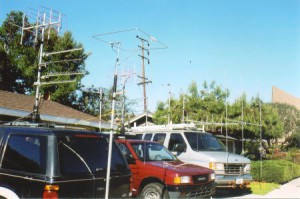 The “Quagi” antenna, a combination of a quad and a yagi, was invented and developed in Wayne’s back yard in 1972 and is still a favorite of VHF / UHF Amateurs all over the world. In 1996, Wayne’s name appeared on the FCC’s OET-65 bulletin as one of the committee members who developed the U.S. radio frequency safety standards. He integrated and mass-produced a “tool-box transverter” system that covers the Amateur bands from 6 meters to 10 GHz. Wayne continues to inspire us in Amateur microwave and VHF/UHF as he leads Hams in local, interstate and international radio contest outings. An attorney and member of the California BAR since 1975, Dr. Overbeck brings broad knowledge and experience to the Amateur Radio Community.

This is probably the biggest meeting of the year, so try to make it. We’ll see you there!

Post expires at 1:33am on Saturday November 21st, 2015 but will still be available in the archives.